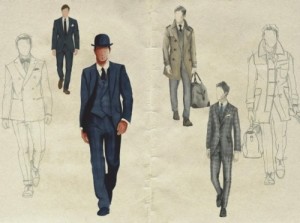 Grab the best QR apps iPhone *or* Android at http://www.qrdroid.com/get

Hointer?  That’s what they call themselves?

Well, apparently yes. The concept here is the target customer of the male persuasion is a “spearhunter,” someone who’d rather not shop for clothing, who’d prefer to interact with a gadget instead of a salesperson. Sounds like most guys we know.

Welcome to Hointer, fella. Utilizing QR Code-enabled technology and a whole lot of German robotics Hointer is reimagining shopping for men into a Zen-like experience.

The apparel is strung to bars with carabiners, easy to browse. After downloading the Hointer app, a shopper simply scans the QR Codes and selects a size. The information is sent over the Internet to a stockroom robot which finds the item and drops it via a chute into one of the store’s dressing rooms with a “whoosh” sound. One Yelper remarked, “don’t underestimate the whoosh.”

If he wants a different size, he can request it on his phone from inside the fitting room. A designated chute for the “no’s” whisks the rejects away and removes the item from the mobile app’s cart. “Yes’s” can be purchased while still in the dressing room by a wall-mounted tablet and a slide of a credit card.

How does this work? Every pair of jeans has a wireless tag. A robotic system is connected to the app. QR Codes are creating a new retail technology.