Last February the 1st, I wrote a post to announce QR Droid had been downloaded over 250,000 times in less than 2 months. Now, exactly 22 days later, QR Droid has officially been installed by 250,000 more people, totaling over half a million downloads! That’s more than twice as fast than its first 250,000 downloads, which was already surprisingly fast.

As Android users know, “>250.000” is the top level shown in the mobile Android Market app, so you won’t be able to see this new threshold. However, Android Market WEB version (released a few weeks ago) does show more levels. Check out this screen-capture: 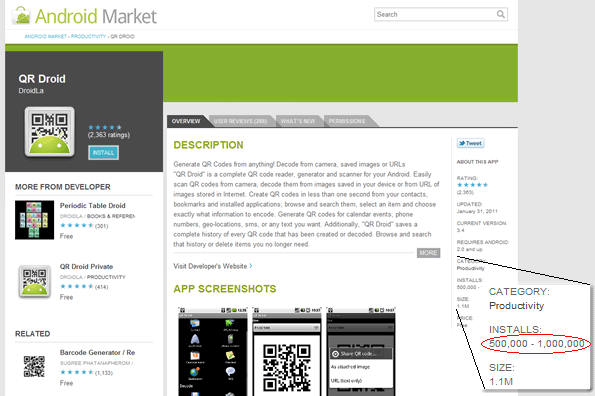 Thank you all for using QR Droid and, especially, for recommending it to your friends! Thanks to you the app is a great success!  We are constantly working hard to make it better, and you can look forward to updating to version 3.5 in next few days

If you have any comments or suggestions to improve this app, leave them here as a comment to this blog, or write an email to info@droid.la.

If you still don’t have QR Droid installed in your Android, get it for free here:

Tags: installqr droid
Back to Top