QR Droid has been installed in more than 5 million Android devices! 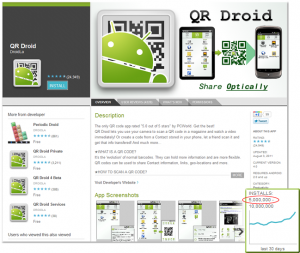 We want to thank you all for using QR Droid, for recommending it to your friends and for sending your comments and feedback to info@droid.la. That really helps us to improve QR Droid even more, and add in the features that you want the most!

If you still don’t have best QR app for Android, get it for free here: