QR Droid 4 Beta has a lot of great features to process QR Codes. Here, we’ll see two of them: Auto-decode and preview

Auto-decode QR Code from its link

When you are browsing in your Android and find a link to a QR Code, just touch that link (from Android Browser, Twitter or Facebook clients or other apps with hyper-links) and you will get this prompt: 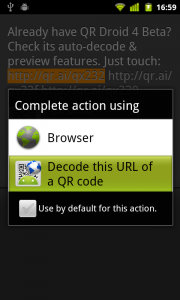 Just select “Decode this URL of a QR Code” and you’re done! You can even choose to use this action as default.

After you choose  this option, QR Droid 4 will do this automatically:

To make it short, you can decode a QR Code shown in your Android browser with one tap! You don’t even have to save that image or copy its URL manually. Isn’t it easy?

This feature works with two of the most popular kind of URL addresses of QR Code:

Right after touched QR Code is automatically decoded, QR Droid 4 will show you a preview of it, so let’s continue with that feature…

After you scan or decode any QR Code, QR Droid 4 will show you a complete, useful preview of its contents.

To continue with previous example: http://qr.ai/qx232 points to a QR Code with a YouTube video, so this is what you get: 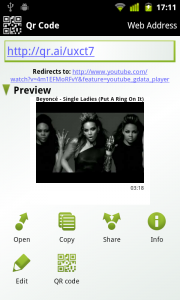 QR Droid 4 lets you know this information right away:

Another example: A QR Code with a Geo-location. Check out what happens when you touch this link: http://qr.ai/qx23f 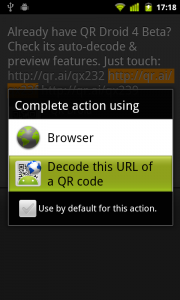 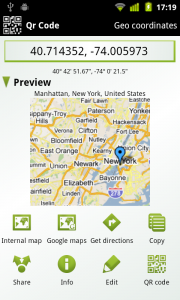 Our final example: A QR Code with a Web page link. I will show you what happens when you touch this link: http://qr.ai/qx239 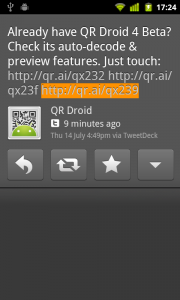 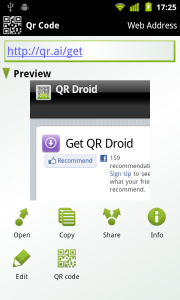 QR Droid 4 decodes your QR Code automatically and shows you an updated preview of Web page it points to.

Important: Some previews (specially the ones from Webpages) can use a significant amount of your data plan. Because of that, by default, QR Droid 4 only shows this kind of previews if you are connected with WiFi. You can change this behavior in Settings: 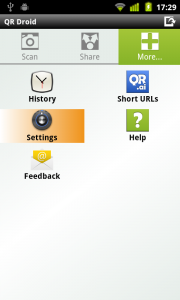 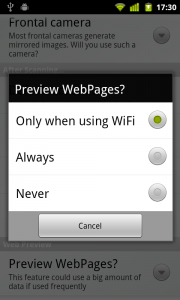 If you don’t have QR Droid 4 yet and want to try these 2 features, get it for free here:

Or scan this QR Code: