End of the World, Part 1

Forecast: Pleasant, with a chance of hell fire and brimstone

Way back in 2000, or was it 1999?  Locals can’t really remember.  But it’s been a few years already since the time that doomsday theorists, so called “esoterics,” or mystic believers, last descended on the sleepy French village of Bugarach (population 189).  These trekkers believe that the local mountain, Pic de Bugarach, is the ideal location to weather what they believe will be transformative events of the year 2012.  This week authorities barred access to the mountain.  Already this year more than 20,000 people have climbed to the top.  These hikers believe the summit is ‘un garage à ovnis’ [a garage for UFO’s].

We still have a little time to see if they’re right or not.  Other Chicken Littles are talking about tomorrow’s Mayan end-of-the-world prediction.  December 21, 2012 is the date regarded as the end-date of a 5125-year-long cycle in the Mesoamerican Long Count calendar.  Various astronomical alignments and numerological formulae have been proposed as pertaining to this date, but this theory has some legs!

-   In Russia, inmates of a women’s prison apparently experienced “a collective mass psychosis” in the past few weeks, while residents of a factory town near Moscow reportedly emptied a supermarket of matches, candles, food and other supplies; fortunately, the Russian Minister of Emergency Situations declared authoritatively that there would be no apocalypse in December.

-   Over 60,000 visitors have flocked to the Turkish village of Sirince, near Ephesus, to weather the catastrophe of 21 December 2012, as New Age mystics believe the town has a positive energy which will save them. 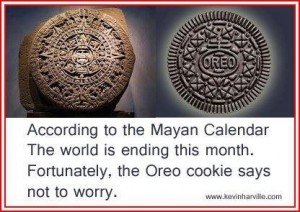 Who will be right? Mayan calendar or Oreo cookie?

-   In China shoppers have hoarded supplies of candles in anticipation of coming darkness. On 14 December 2012, under the “influence” of the apocalypse prediction, a man in Henan province attacked and wounded 23 children with a knife. Just in the last twenty-four hours, nearly one thousand doomsday cultists were arrested in an effort to stem the tide of hysteria.

Last year, on 21 December 2011, the Mayan town of Tapachula in Chiapas activated an eight-foot digital clock counting down the days until the end of the world.