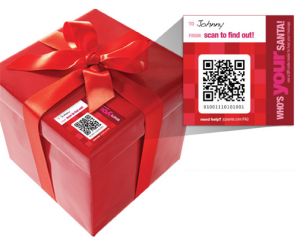 Black Friday, the traditional start of the Christmas shopping season, is the follow-up to Thursday’s Thanksgiving celebration.  We’ve seen QR Codes used to great advantage to thank customers for their ongoing patronage, while inspiring them to take advantage of special deals and promotions.  Taking the holiday season from green-and-red to black-and-white (with a tasteful spot of color now and again), we love to see how QR codes are reducing the stress of the season.
JC Penney has begun adding QR codes to the gift wrap they use for holiday presents.  After the present has been purchased, the giver can scan the code which resolves to a website where they can record a message for the receiver of the gift.  Talk about adding personality to your gift—after the message is recorded, the gift recipient can review your message by scanning the code. 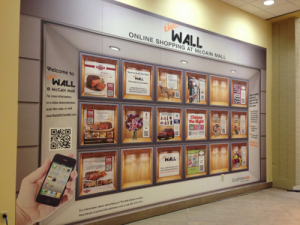 And in the hustle and bustle of the holiday shopping crush, retail stores are using QR Code walls as a way for customers to purchase products without waiting in line.  The walls feature pictures of popular items which savvy customers can scan and drop in their virtual shopping cart for instant online purchase.

Even charities like the Salvation Army are getting in on the act, using QR Codes to tap into people’s generosity and holiday spirit.  Salvation Army bell ringers in the western US will have the opportunity to put QR codes on their kettle stand this season.  Generous shoppers can scan the code and make a “text-to-give” donation if they want to hang on to the change in their pockets.  Text to Give allows nonprofits to receive mobile donations of $5 or $10 that are billed directly to the donors cell phone bill. 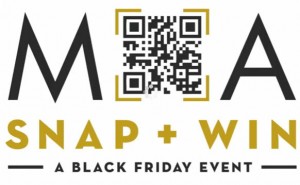 Click on the image to read qrcodepress.com’s writeup of last year’s campaign

And last year’s Mall of America (MoA) Snap+Win promotion was a Black Friday instant classic.  At 4.2 million square feet (390,180 square meters) MoA is the nation’s largest retail and entertainment complex.  On Thanksgiving Day 2011, they opened their doors at midnight, drawing 15,000 shoppers. Those shoppers were not only getting a head start on their Christmas shopping, but were participating in a massive $30,000 cash prize giveaway in the world’s largest QR Code “snap and win” event.  How did it work? One hundred QR codes were embedded in a 50’ x 30’ MoA logo which eager contestants snapped with their own smartphone.  At the appointed time, guests stood by their code and waited for the cue to snap.  The code resolved to a web page that revealed their prize.

QR codes are helping retailers and customers find the fun (and the meaning) in shopping again.

For more fun with QR Codes this Thanksgiving, read the other blog posts in our Giving Thanks series.