QR Codes are giving some teams and their sponsors a competitive edge on and off the field.  The betting website Betfair has created the world’s first QR Code made with soccer balls (OK, we’re using a little creative license here, they are called footballs in Europe!).  Using over 2,000 balls, the stunt was intended to drive betting on last year’s Republic of Ireland vs Estonia match in Dublin.   Check out this one and a half minute video (or scan the code at right) to see how they pulled it off. 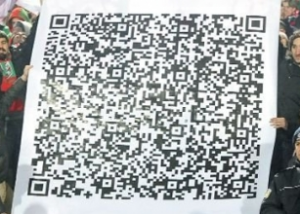 And for those fans with an axe to grind, you may want to consider this novel approach to trash-talking your favorite team’s opponent.  Turkish fans went high tech with an enormous QR Code banner.  Inevitably the banner was scanned on the phones of scores of curious supporters of both teams.  The code resolved to a website which we can diplomatically describe as being full of unsavory words about the opposing team.

For fans of American Football, you can scan the code to visit the NFL’s Thanksgiving page, with game times, commentary and more.  According to the site, “This year’s holiday features a heaping helping of intriguing matchups, starting with the Texans in Detroit, followed by the Redskins in Dallas and concluding with the Patriots at the Jets.”

Have you seen some innovative uses to QR Codes in sports?  Let us know in the comment box.  We’re always on the lookout!

For more fun with QR Codes this Thanksgiving, read the other blog posts in our Giving Thanks series.