Healthy rivalry? Bring it on!

AC/DC… legendary rock band?  or historical War of the Currents?

Oh, how we love a good rivalry.

– The Hatfields vs. The McCoys (McCoy’s pig wandered over to Hatfield’s property; Hatfields claimed the hog as their own; 13 years later two Hatfields and 8 McCoys were dead in this legendary feud)

– Tesla vs. Edison, or AC vs. DC (In the 1880’s, the War of the Currents pitted Edison’s Direct Current (DC) against Tesla’s Alternating Current (AC); the rivalry was never resolved, at least not until the legendary rock band AC/DC was formed in 1973, becoming one of the highest-grossing bands of all time)

– Garry Kasparov vs. Deep Blue (IBM technicians tried, and on the third attempt, succeeded, in programming a computer to defeat a chess grandmaster in a full match; Kasparov prevailed against Deep Blue in 1996; in the 1997 rematch, the machine prevailed; good sport Kasparov starred in a humorous 2001 Pepsi Superbowl commercial inspired by the match-up) 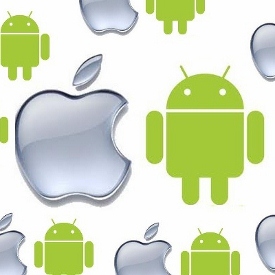 Why Apple? Why Android? We’d like to hear from you!!

But we don’t think any rivalry is as interesting as the one between Android and iOS users.  The competition and passion run deep.  We asked our Facebook fans their opinions.  Here’s a roundup from our Android-using friends:

“…cause I love ma Samsung phone,” Janet G. enthused; other fans “liked” her pronouncement.  Diana Kay L.-B.  “loves all the features and the price,” while Jacki W.-J. enjoys the keyboard.  Sean M. Ph. M. states simply, he loves his Android “because it’s not Apple.”  Snap.

Other fans appreciate the openness of the Android ecosystem.  George P. T. opines, “I can use MY phone the way I want to,” and David H. concurs, “Open systems are the only way to go, it’s like pushing the EZ button.”

Still others cite financial reasons for their preferences.  Some got a great deal like Lisa R., “(My Android device) was very new and shiny plus the phone contract was a good ‘un.”   Or as Michael C. simply said, “Just the price.”

To read the rest of the pro-Android comments from QR Droid users, visit our November 24th post on www.facebook.com/qrdroid.

Zapper Scanner aficionados and other Apple fans – represent!  We want to hear from you, too.

iOS QR Code. Everyone’s talking about it.  Get yours here.