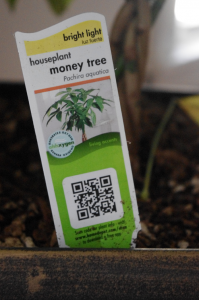 Get the best barcode reader for iPhone or the best QR generator Android to access invisible codes and much more!

I got my mind on my money and my money on my mind.

Upconversion luminescence — emission produced at wavelengths shorter than the excitation light is actually what we’re thinking of.

A team of researchers from the South Dakota School of Mines and Technology and the University of South Dakota have developed an invisible QR code.

The codes, invisible in ambient light, glow green and blue when a near-infrared laser is used to excite the printed phosphors. That’s upconversion luminescence for you. Once illuminated by the laser, the codes can be read with your favorite Android QR scanner, QRDroid or Zapper app.

In fact, in the spring of 2011, Sweden commissioned an artist to design new, QR Code-embedded currency. They subsequently decided to postpone placing the new bills into circulation for security concerns. 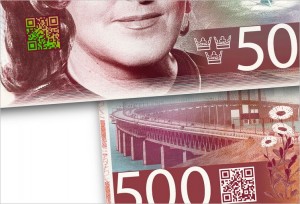 Good news for Sweden:   The invisible QR Code is made of printed nanoscale phosphor particles that can serve as an enhanced security watermark. Nanoparticle-infused ink is both chemically and mechanically stable. Once the ink dries on a piece of paper the code could still be read even if that paper is crumpled or folded several times.

Another approach they can consider is to embed a microscopic message within the QR code that shows up as a different color under the laser. This effectively creates a code within a code which can only be seen under a microscope.

The Netherlands, however, have forged ahead with QR Codes on their currency. To celebrate the 100th anniversary of the national mint in Utrecht they printed a limited-release stamp of QR Code-designed coins. The Code resolved to a Dutch Ministry of Finance page (in Dutch).