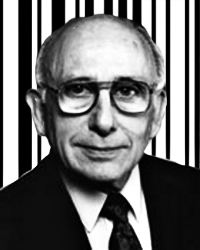 The Co-Inventor of the Bar Code, Norman Joseph Woodland, dies at 91

As we mention in our eBook—What are QR Codes?—Woodland and Bernard Silver were graduate students in Philadelphia when they overheard a supermarket executive asking a school dean to figure out how to capture product information at checkout.  Woodland dropped out of graduate school to work on the idea.

What we like best about Woodland’s story is that his “a ha!” moment came while he was relaxing at the beach.

According to family lore, he knew Morse code and, on a solitary visit to the beach, was inspired to create a code based not on dots and dashes but on thick and thin lines, after trailing his fingers through the sand.

As is the case with many inventions, Woodland tackled the idea for capturing product information at checkout years before the laser scanning technology was readily available to make it a reality.  Woodland and Silver received a patent for the bar-code technology in 1952, but it wasn’t until 20 years later, in 1972, that Woodland was able to help IBM bring the UPC code to commercial viability.

QR Codes, our favorite technology, owe a debt of gratitude to the work Mr. Woodland and his partner, Bernard Silver, did to bring the trailblazing UPC, or universal product code, to the mainstream.  Thank you, sir.

Use the best barcode scanner app, QR Droid for your Android.   Zapper Scanner bar code scanner iOS for your iPhone and iPad.

Here’s a link to the New York Times obituary.