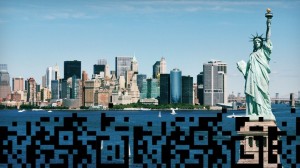 For the French, for Americans, and for many others the world over, the month of July is often associated with liberty, and this month we’d like to talk about how the QR code unleashes your freedom. The freedom to not get bogged down with so much information coming at you at warp speed. The freedom to record all you need to know about… anything and everything, by simply pointing and scanning (or creating) a QR code.

In a matter of seconds, a zap with your QR Droid Zapper-enabled smartphone (Android or iOS) can get you:

These are just a few examples of the myriad ways that QR codes can unleash your freedom. Magazines, taxi cabs, signs, waiting rooms at the doctor’s office, business cards, letterheads, T-shirts, even cupcakes, they’re all blank canvases for the interactive digital information provided by QR codes. You can even scan a head of broccoli and find out if it’s organic, where it was grown and what pesticides were used, if any. All you need is a smartphone and that little code which will become your treasure map—to special deals, savings, efficiency, information sharing and FREEDOM.

That being said, in spite of all the promise of QR codes, there is an equal amount of negative press as well. There are entire sites dedicated to some of the most block-headed ways that QR codes are being used, a good example being wtfqrcodes.com. Misuse of QR codes by both businesses and individuals dilutes their effectiveness, leaving the QR code user frustrated (although possibly entertained).

So to really maximize your QR code freedom, here are some Don’ts and Do’s to consider.
Don’t:

When you use a top-notch, award-winning app (hint, hint: QR Droid Zapper), and when you follow some basic guidelines for effective use of QR codes, every day can be your personal Independence Day!

Tags:
Back to Top